Any commercial ship uses noon-reports. It comes in all forms, but in fact, it is a data sheet prepared by the ship’s chief engineer on a daily basis. The report provides data such as the vessel’s position and other relevant data and is often used to assess the performance of the ship based on its speed and environmental forces, including weather conditions.

Noon-reports are the most used form of monitoring by charterers. They use it to assess the difference in the performance against the Charter Party and to detect underperformance or possible issues.

The noon-report is sent by the master to shore management at a fixed time on a daily basis. Normally it is sent during noon, hence it’s name.

The issue with using average values for fuel-efficiency assessment

As said, noon-reports include weather data, such as wind direction, wind force, sea and swell condition. They are general values, taken at the time of report preparation. As we all know, the weather can change significantly per hour. An average value of wind speed at noontime might vary significantly from windspeed at night. Also, average speed does not say much, only if the speed is constant for 24 hours, which it (almost) never is.

Another major issue is that we often see an extremely stable consumption being reported, such as shown below.  This reported value is stable for 22 days in a row, which makes it clear that it is useless for the assessment on performance and fuel-efficiency. We need something better.

So, with all available data around us, why not upgrade from using noon-reporting as the basis of performance monitoring, and start monitoring in real-time? Often because it requires capital investments in Big Data solutions, hardware, cables and sensors. And for charterers, it simply isn’t possible to install anything on board as they are not the owner.

A new approach: The Digital Twin

As a radical new approach to efficiency monitoring for ships, We4Sea has developed and validated a Digital Twin concept. A Digital Twin is designed as a “ living” digital simulation model that updates and changes as its physical counterpart (your ship) changes.

The Digital Twin combines vessel specifications, such as hull shape, engine- and propellors, sensor-data and remote-sensed data such as AIS and environmental data (wind, waves, currents). The Digital Twin incorporates algorithms developed by We4Sea’s experts and validated in various projects. It is a web-based monitoring solution, focusing on increasing vessel performance.

It clearly shows the power of data-driven reporting. It significantly increases insight.

The overall match between reported and calculated consumption was, was 98% for the complete voyage. But our Digital Twin reports several moments where the calculated fuel consumption varies significantly from the values mentioned in the noon-reports.

Around March 23, and March 26th, we calculated that more fuel was burned than was reported. When zooming in, this becomes even more clear.

We asked ourselves: what happened?

In our Digital Twin, we can calculate the added resistance from different factors, such as wind, waves, currents and shallow water effects. We knew the specifications of the ship, the heading and the speed. If we then combine wind force and wind direction on the vessel’s location, we can calculate the added resistance [in kN] as a result of wind impact. Same goes for currents, waves etc. In the graph, It is now clear that around March 23-24 the calm water resistance peaked (the blue area), meaning a strong speed increase of the vessel. Around March 26-27, strong waves have significantly contributed to the fuel consumption (green area), while speed dropped significantly (blue area). 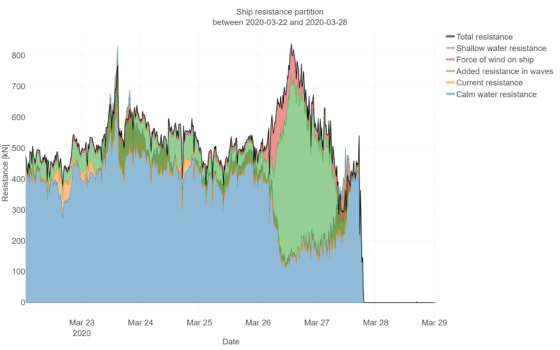 We can also plot the effect on fuel consumption of combined weather effects: 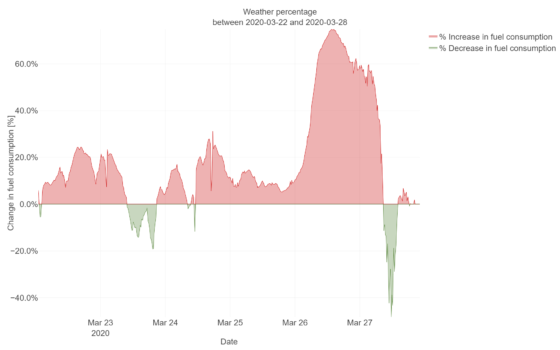 On March 26, 74% of fuel burned can be attributed to weather impact. On some moments, however, the combined weather effect is positive (green area), for example when having favourable currents of a tailwind. None of these insights can be derived in the noon-reports.

All of these days looked like a normal day when looking at the reported fuel consumption. The master just reported strong headwinds, with average fuel consumption as can be seen in the first plot.

This is why noon-reporting alone will not help you in improving the fuel-efficiency of your ships. You simply miss all these effects in your data.

Using the Digital Twin, you can now clearly see weather impact and correct for it. This also enables vessel benchmarking, as we now can take out the weather effects. With this novel way of monitoring ships, you now can report a “weather-corrected” fuel consumption per mile.

We4Sea data and models have been verified against real-world ship performance data collected by customers’ on-board vessel performance monitoring systems, and accuracy was found to be over 97%, depending on ship-type. This high level of accuracy will support owners, operators and charterers to have new insights into fleet efficiency and make informed decisions on the improvement of fuel efficiency.

Interested to start? Drop us an e-mail at info@we4sea.com


Poortweg 4A
2612 AP Delft
The Netherlands

This project has received funding from the European Union’s Horizon 2020 research and innovation programme under grant agreement No 877766.
admin login